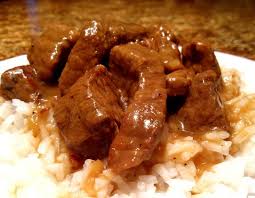 Heat oil in a large skillet over medium-high heat. Season stew meat with salt & pepper then adds to skillet, stirring once or twice to sear as many sides of the cubes as possible, for about 3-4 minutes. Remove from heat and set aside.

In a medium-sized stockpot, combine beef broth, onion soup mix, and 1/2 cup water and stir well. Add stew meat, stir and cook over low heat, covered, for 1-2 hours. Do not let the pot reach a full, rolling boil or the meat will get tough.

Remove stew meat with a slotted spoon and set aside. Increase the temperature of the broth to medium-high and bring to a boil. Add cornstarch to a small bowl and whisk in the remaining 1/2 cup of water until smooth. Drizzle cornstarch liquid into the broth, return to a boil, and cook while stirring, for 1 minute. Reduce heat to low. Once the liquid has stopped boiling and has thickened, add stew meat back to the pot and stir to combine. Don’t leave the meat in the broth while boiling to thicken the cornstarch or – you guessed it – the meat will get tough. Allow meat to get happy in the gravy for about 5 minutes then serve over white rice.

The gravy finishes a little on the salty side which is exactly how it should be when served with white rice. This isn’t a stew, it’s meant to be served over some sort of starch so I make it saltier than I would an actual stew that’s meant to be eaten on its own. 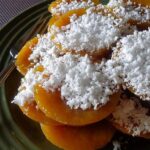 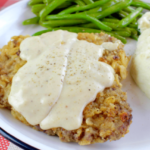