Classic French cooking is not about speed or simplicity, nor is it about low-fat or low-cal, and Beef Bourguignon is no exception.

It’s a dish that requires quite a few steps and provides a hefty amount of calories, but assuming this is a once in a while affair rather than a daily occurrence, I find the reward, an earthy, multi-layered stew that exemplifies the concept of comfort food, well worth it.

Heat a large, 14-inch skillet over medium-high heat. Add the bacon and cook until crisp, about 5 minutes. Using a slotted spoon, transfer the bacon to a plate lined with paper towels.

Drain the rendered bacon fat into a bowl, then measure 1 tablespoon, adding it back to the skillet.
Season the beef with ½ teaspoon kosher salt and ¼ teaspoon black pepper. Keep the skillet over medium-high heat, and add the beef in two or three batches. Cook each batch until browned on all sides, about 2 minutes per side, adding 1 more tablespoon bacon fat between batches (use olive oil if you run out of bacon fat). Transfer the browned meat and the cooked bacon to your slow cooker.

Deglaze the pan: add ¼ cup of the wine to the skillet, scraping the bottom of the pan. Add the wine to the slow cooker. I like to use a rubber spatula to make sure every little bit of yumminess goes into the slow cooker.
Season the onions and carrots with ¼ teaspoon kosher salt and ¼ teaspoon black pepper. Add another tablespoon of bacon fat (or olive oil) to the skillet. Add the onions and carrots. Cook, stirring occasionally until onions are soft and browned about 6 minutes.

Add the garlic and tomato paste, and cook until fragrant, 1 minute. Transfer the vegetable mixture to the slow cooker, stirring it into the beef and bacon. Add ¼ more cup wine to the skillet and deglaze it again, then pour the wine into the slow cooker.

Turn the heat off. While the skillet is still warm, use damp paper towels to wipe it clean. You’ll use it later again.

Add the remaining kosher salt, reserving ¼ teaspoon for later, the bay leaf, beef stock and the remaining wine to the slow cooker. The liquid should cover about ¾ of the meat and vegetables. If it doesn’t, add a little more stock.

Cover the slow cooker and cook on low for 7 hours, until the dish is delightfully fragrant and the beef is very tender.
minutes before beef is done, heat the skillet over medium-high heat. Add the olive oil, the mushrooms and the remaining ¼ teaspoon kosher salt.

Cook the mushrooms, stirring often, until browned and just tender about 5 minutes. Remove from the skillet and place in a colander to strain out extra liquid. Wipe the skillet clean.

Mix the potato starch with 2 tablespoons of cold water. Once the meat is cooked, strain the cooking liquids into the skillet. Place the beef and vegetables back in the slow cooker, cover and set to warm. Heat the cooking liquids in the skillet over high heat. Add the potato starch mixture. Cook, stirring until the gravy thickens and reduces by a third, 8 to 10 minutes.

To the beef and vegetables in the slow cooker, add the mushrooms and the gravy. Gently stir to combine. Set heat to high, cover, and cook just until heated, about 10 minutes. Garnish with parsley if using and serve. 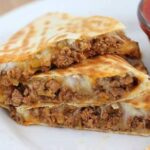 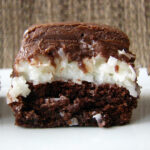